Every year the villagers of Tollerton get together for the annual village event on their open space. As the parish council kindly let us train there, we put on a display at the event by way of 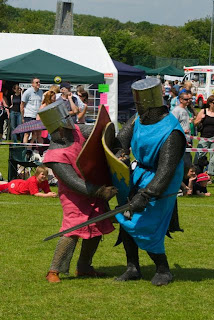 thanks. This year we decided to put on a later period event, based on the revolt of Henry II's sons 1173-74. This gave the chaps to get their surcoats out & full face helms.
The weather was very kind to us, giving us a sunny, pleasant day. Perhaps it was a bit too warm to be fighting in full mail, but it suited the audience. 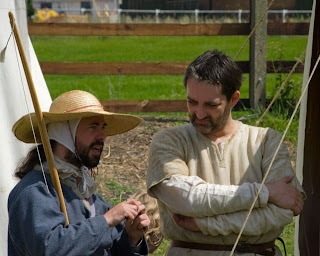 Conroi de Vey were joined by their friends from other groups of Regia Anglorum, and Conquest.
We set up our wic & got breakfast sorted, so that the real cooking of the day could begin. 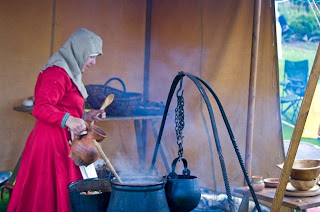 As usual Sue did us proud with a tasty menu, and interesting things to try, including a pearl barley 'risotto' style dish. 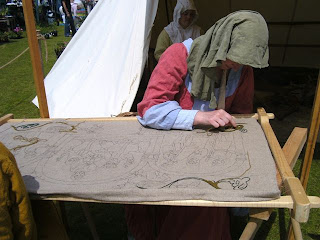 Our panel for the Wychurst wall hanging got an airing & some more work done on it.
There were also various other crafts being practiced on the wic, including spinning & leatherwork. 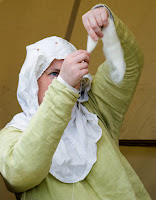 We had a couple of sessions in the arena. As Nottingham was loyal to Henry II & Leicester was for the rebels, we envisaged some aggravation between the two forces. An announcement of some of Leicester's men being spotted nearby caused the Nottingham men to rally, giving us a chance to explain the clothing & armour as the men dressed for battle.
A clash between the forces followed. 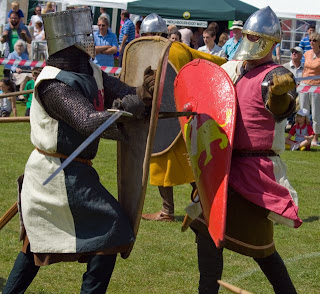 In the later session, the warriors showed their skills with different weaponry, and different styles of fighting, in groups and as individuals. 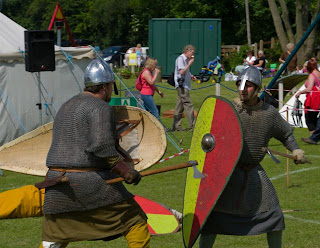 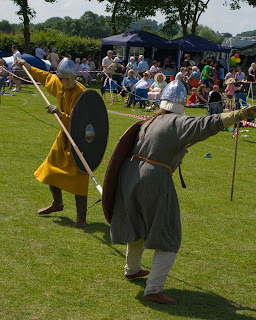 Mike demonstrated that the reach of a spear & the speed of a lightly armoured man can prevail over the heavily armoured knight (just not very often). Being a seasoned, sneaky, back stabbing fighter helps! 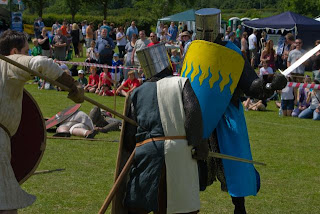 Even after their exertions in the displays, Conroi de Vey was still ready to give their all in the 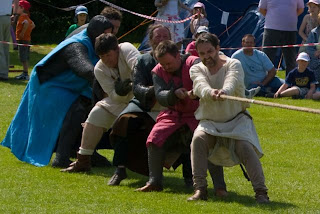 tug-of-war competition. We entered a couple of teams, but the slippy turn shoes didn't help our efforts any & we came 2nd.
This event always gives us a friendly, relaxed show. We always enjoy ourselves & the local folk are most appreciative of our displays.
Posted by Conroi De Vey at 9:44 AM No comments: