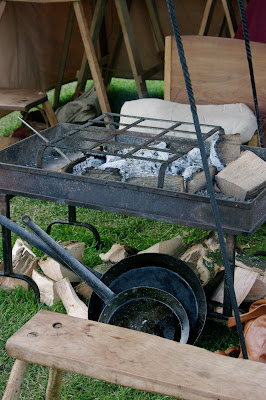 The Whit bank holiday weekend found us at Thornton-in-Craven, near Skipton in Yorkshire. Surrounded by some beautiful countryside, our show was in the grounds of Thornton hall, adjacent to the farm animals & children's play area. Being in an elevated position, we certainly noticed the windy conditions, & we also managed some showers & sunny spells. The tents coped very well with the weather, on the whole, which is always a relief. On our wic, we had the usual cooking activities, as well as sewing, spinning, naalbinding, etc. Other wic have similar occupations, as well as other crafts & occasionally some traders, giving us the opportunity to find some much desired pieces of kit. 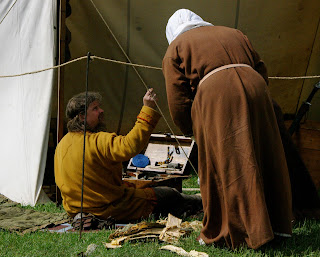 In the arena our military displays were based on the meeting of Eric Bloodaxe, the local Viking leader, with the Saxons, where he was betrayed and killed. In the picture below Stephen & Debbie depict a spearmans. This was the ubiquitous weapon of the time, used in conjunction with a shield whilst fighting 'in a line' to form an impenetrable barrier. Thornton church is in the background. 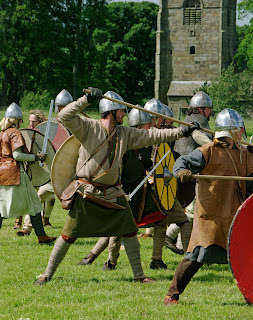 After the battle, where the warriors show their skills, fighting as a team, they then get to show off their prowess, fighting as individuals. This is often done, fighting in 'circles'. This can be done 'with honour' or without. The warriors enter the field & fight, aiming to be the last man standing. Obviously it is beneficial to gang up in small groups to help defeat opponents. When honour is in play, folk acknowledge their adversary before fighting. When the is no honour, backstabbing & turning on your former comrades without warning is the norm. 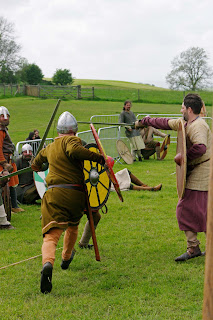 On the left, Jamie & Mike have joined forces to defeat Tom, although they later fought against each other.
Mike survived to face Guthrum in the final fight, which he won.
However, the consequence of this is 'death by children', where the Regia youngsters get to rush onto the field with their wooden swords & 'kill' the champion- usually with great glee! 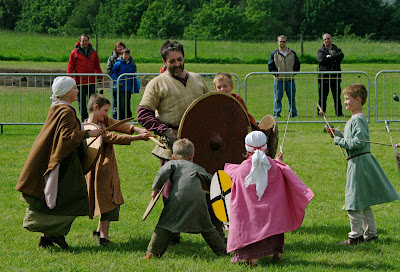 Our national group, Regia Anglorum, celebrates 25 years since its foundation this year. It was decided to have a party after the show closed on the Sunday. We had cake, music, good company & lots of banter to make the evening one to remember.
In a few days time we will have a much smaller show, in the village where we train, as part of their annual village event.

Posted by Conroi De Vey at 9:48 AM No comments: