We had a lovely setting for the St Ives show, alongside the river in a pleasant meadow. Sadly the weather wasn't of the same caliber, and the Saturday was particularly wet & cold. However, it improved after that & by the May bank holiday Monday, we had a bit of sunshine, even if still 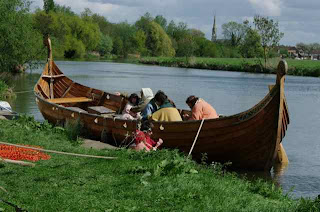 chilly in the shade.
The proximity of the river meant that we could row one of our new ships down to the
site, giving Regia members chance to examine its sleek lines & construction. 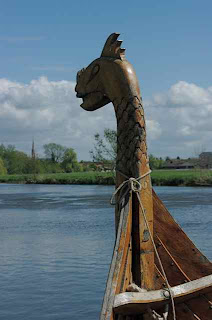 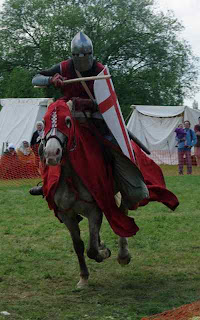 There was sufficient space for the horses to be deployed. After showing the development of the mounted knight over a couple of centuries, some
horseback skills were demonstrated before mounted combat ensued. 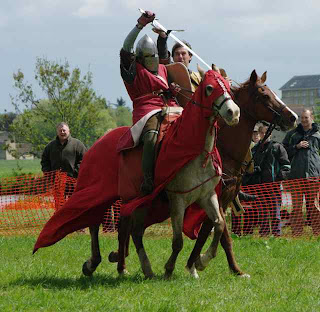 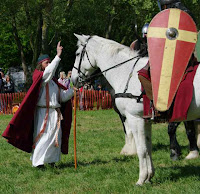 The warriors of Regia then had their chance to display their skills in the arena, with some line fighting. The mounted knights continued their own battle.
Trevor donned his ecclesiastical robes to bless the men and give absolution to the dying.
We had the chance to do some more woad dyeing on the Sunday. Hanging round the fire was a popular pastime!
Doing a 3 day show is always good as it enables the group to settle into the lifestyle more. After all, we're there to try & feel what it was like to live in that way, a thousand years ago.
Posted by Conroi De Vey at 5:24 PM No comments: