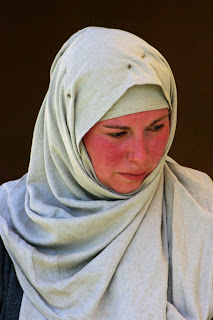 Phew! What is it about the armed forces weekend that makes the weather so hot! Last year was a serious scorcher, & this year wasn't much cooler. However, I decided to brace myself & still run the woad vat this year. I'd pre-dyed some skeins in various yellows & had some plain white skeins. This gave me a range of greens & blues. I also re-over dyed some cloth that had been through weld & then woad before, to try & achieve a more even, darker green. The results of the latter can be seen hanging on the wic ropes in the last picture.
The woad vat can be seen, hanging over the fire in the photograph below, with Jane in attendance. 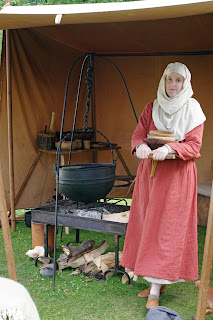 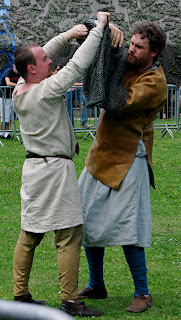 We decided to start the military display with the 'arming of the thegn'. Stephen volunteered to be the thegn, with Kristyan helping to don his war gear. Once he'd put on the leather tunic over his normal clothing, he was helped on with his mail shirt. We were depicting a dateline from the early 900s, so the mail is relatively short & known as a byrnie.
Then he added further protection in the form of a helmet, and started to arm himself. 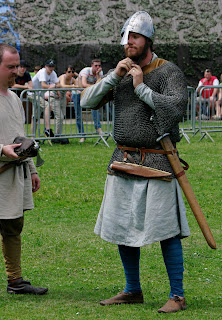 Stephen wore a scramseax, in a decorated scabbard, lying horizontally from his waist, as well os a sword at his left hip.
He then picked up his shield which can be used offensively as well as for defense. Gloves offer protection for the hands. His final weapon is a single handed spear. These are shorter and lighter than the usual 2 handed spears, seen in the following picture. 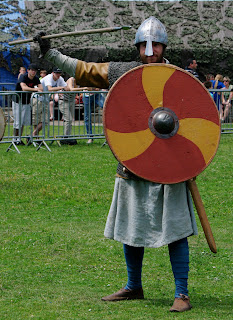 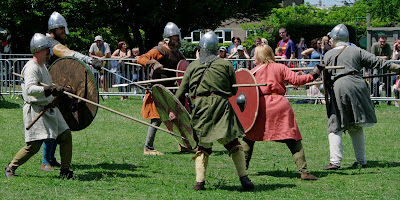 Alot of the warriors would be far less well protected and armed, as you can see above. However, they all have shields & most would wear helmets. A short line fight was demonstrated, to show the standard fighting technique used. 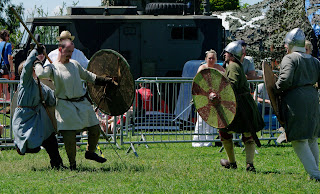 However, later on we showed some different fighting techniques, where they act as individuals. These we call 'circles', which can be fought with or without honour. In the former, an opponent must be acknowledged before a fight commences, which is purely one-on-one. When honour is dispensed with, they are allowed to gang up on each other, back stab, & generally do whatever is necessary to remain as the last man standing. The 'photo on the right shows Kristyan defending himself from an attack from behind, whilst 2 others try to rush him from the front. He fought them off valiently, but fell eventually to Gary's sword- who was then stabbed in the back by Jen, who held sway in that bout. 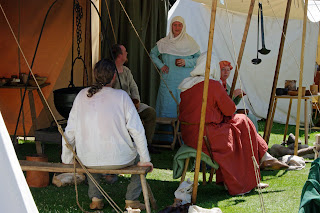 Once all the fighting was over, they returned, hot & sweaty, to the wic, where refreshments were on hand. Cooling off was the main requirement. We had already decided not to cook our meal that day, so a cold spread was provided by Jane, which was most welcome. 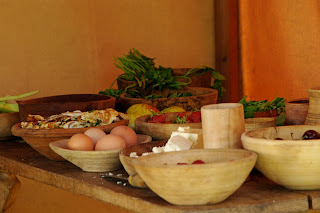 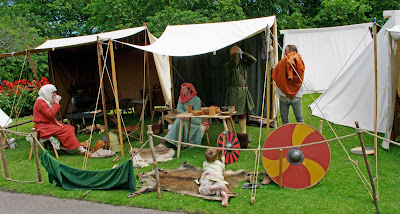 Despite it being rather warm to wear layers of wool & linen , and to run around in hand to hand combat, we had a most enjoyable weekend at Nottingham Castle, helping to support the armed forces weekend. There were lots of other military stands and events for the public to peruse, making for an interesting event.

Posted by Conroi De Vey at 5:47 PM No comments: