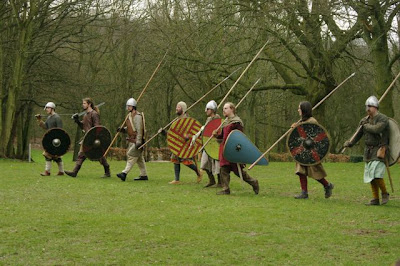 Our national group has a training weekend in the spring at a scout camp near Ashby-de-la-Zouch. It gives us chance to blow away some of the winter cobwebs, try out some new tactics, hone older skills & do some weapon tests.
Spear work is fundamental since this is the common weapon of the period we portray. The warriors tended to fight in lines, forming a shield wall. However, once this was broken down during the fight, more random tactics would be brought into play, with smaller groups fighting together. 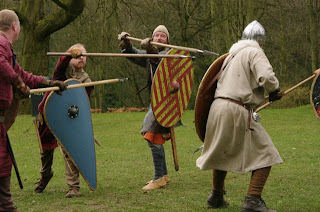 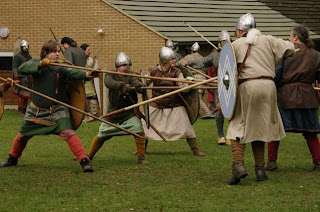 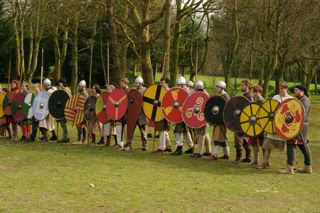 We also have archers on the field (space permitting), so they have to train to receive arrows. The normal line formation is used when the arrows are loosed at body height. When lob shots are used, the shields are raised to protect their heads. 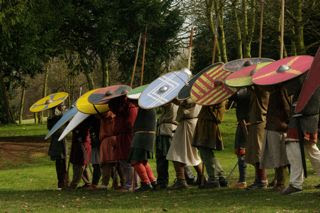 More tactical fighting is also practiced. Below shows one side, lining up between 2 rows of shields. These represent a bridge, with men at either side trying to gain the bridge & cross. 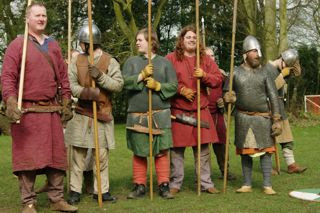 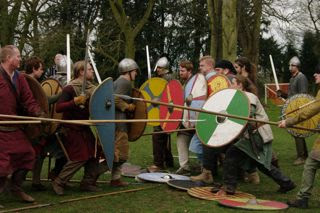 We also have a ship boarding 'game' where spears are laid on the ground to form the prow of a ship, which has rammed into the side of another ship, whose side is delineated by a row of shields. The attackers form up in the prow & try to board the defending ship, without 'walking on water'. It was interesting to see how ineffective a slow but steady attack was, whereas a mad rush ( in the form of a boar snout) was much more productive ( as seen in the 'photo above) . Once the defensive line had been broken, the outcome was still open. 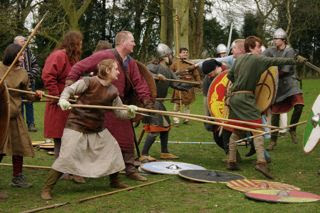 All in all it was an excellent weekend, preparing the military for action during the summer.
Posted by Conroi De Vey at 9:25 AM No comments: