We can get through over a kilo in a day.

I also have an addiction to flour, and so in my ceaseless mission to provide bread for the bread bin, I have been getting my hands dirty with a number of different flours recently.

I mentioned in a post on the banquet a few weeks back that bread was a staple food in our period. As a result, we almost always have some type of bread on the wic as it's one of the comparatively few authentic foods.

Trying to have authentic food on the wic is actually quite hard, because even where the same food existed in our period, it is very different to the modern product.

As regards bread, this is for a number of reasons:
It's the last point that I want to talk about a bit today.

Unless you're another bread freak, if I say "bread" to you, then you probably think of something like this:

This loaf doesn't look much like the picture I posted above, and not just because I made it rather than a professional baker.

I have baked with two pre-20th century varieties of flour: the Doves Farm Heritage Wholegrain and their Einkorn. It is the heritage wholegrain which you can see at the top. The einkorn is a prehistoric hulled wheat, and the Heritage wholegrain is a recent free-threshing variety, so both are quite a long way from the wheats that would have been cultivated in our era, but sadly, they are the closest I can obtain. As almost all other wheats you can buy are the result of the green revolution in the 1960s which  produced short stalked wheats with a high grain yield, however, they're close enough to provide interesting practical insight into what bread in our period might have come out like.

Both varieties come out significantly flatter and denser than any other flour I bake with:

On the left you can see two einkorn loaves, both baked from 500g of flour. On the right is a loaf of modern flour. Even accounting for the accidental perspective in the shot, the einkorn loaves simply don't rise as much as modern flours. Partly this is because they tend to spread out more than rising, so my suspicion is that they just don't develop gluten structure the way modern wheats do.

The cracks and holes in the surface of the bread in the photos below also suggest this: instead of stretching, some of the gluten strands have just given up and snapped under the pressure of the air bubbles which are forming, creating the cracks and holes you can see below.

If I'm right - and I don't have any authentic flours to play with - then even though we know that they did have yeasted breads which rose, I'm guessing that by our standards they were pretty flat and dense. They would take a fair bit of chewing, rather than being the light fluffy loaves we eat today. Of course both of these flours are wholemeal, which is naturally slower to rise anyway because the sugars aren't quite so easily accessible, but I let these rise as much as I dared without risking them collapsing.

Just for interest, see the difference between the pure white roller-milled sourdough on the left, and the stoneground wholemeal einkorn on the left. They're pretty much opposite ends of the wheat spectrum: the one is silky, smooth, and stretchy, and the other is tight, textured and dense. 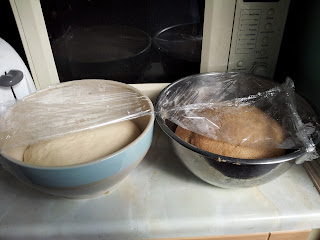 One other point: the Heritage variety is a blend of two older varieties, April Bearded and Spring Wheat, both from between the 17th and 19th century. If you're interested in reading more about these heritage varieties, then Brixton Windmill have an interesting post on their efforts to grow it, as do Howell Farm in America.

Posted by Caroline Williams at 8:24 PM No comments:

Our national society, Regia Anglorum, organises a spring training weekend every March to give us all a chance to practise together before the show season starts. As described in a previous post, the warriors had a splendid time with their usual weapons training.

This year, however, in preparation for our 1213 show at the Royal Armouries some of the warriors have been learning to fight in thirteenth century kit. I have to say I was glad I wasn't fighting in it as it didn't look as if they could see much!

Most of De Vey, however, used the event to train on the archery range.


National trainings are also an opportunity for civilians to get together and learn new skills. Below you can see a member of Regia who is a blacksmith in "the real world", running a session on repousse. Other sessions included bead-making, costume-making, and Old English. As you can probably tell from the text at the top, I attended the last of these. Can you work out what that text says? Answer below the picture. 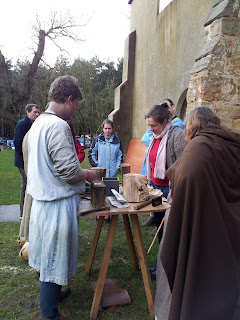 [1] Hello! My name is Leofwine and I am a baker. My partner is Toki, a shipwright.
Posted by Caroline Williams at 11:51 PM No comments:


On 9th March, Conroi de Vey had its first banquet. In previous years we've gone out once a year for a meal at a restaurant, but this year we decided to hire a local hall and put on our own feast.

The evening started with a talk by the Friends of Thynghowe about the Thyng site which is believed to exist in Sherwood Forest. Thyng sites are known throughout Northern Europe and are places where local people gathered together to make community decisions and to conduct legal proceedings. Conroi De Vey will be leading Regia Anglorum in the Viking Spring Thing on 18th-19th May 2013 in Sherwood Forest, and this talk was excellent preparation for that.


After that, we cracked on with the important part of the evening: food! Food was a communal affair, with most families cooking at least one dish.

Toki and I provided the bread: all 13 pounds of it. Although that sounds like a lot, it is actually comparatively low for the period, when bread was a staple in the diet. The rule of St Benedict allows a pound of bread per person per day, for example, and in Aelfric's Colloquies, the baker argues for the importance of his craft on the grounds that without his work, all tables would seem empty and all meals tasteless. I experimented with a number of different flours for this, as most flours you can buy today are the product of the Green Revolution in the middle of the 20th century, in which new high yield cultivars were developed. Among other things, this means that modern wheat is significantly shorter than period wheat would have been. Although it isn't possible to buy the wheat varieties which would have been available in our period, I did make an einkorn loaf. Einkorn is a prehistoric variety grown in the Mediterranean which was abandoned in Roman times. That makes it about as far away from period wheat as our modern flour, but it gives a different perspective on what it's flavour and texture could have been. 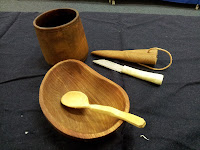 Although for once all the food was cooked with thoroughly modern technology, the actual meal was conducted with period technology. No forks in this period: the key utensils are the spoon and knife. I'm proud to say that the spoon photographed here was whittled by me during a show in 2012. The knife shown here (made by Toki) is a typical eating knife for the period: ideal for spearing a vegetable or cutting through a piece of meat, it is considerably sharper than your average modern eating knife and can equally well be used to carve the aforementioned spoon. Other points to note are that in our period plates have yet to come into existence, so bowls are the order of the day.


Important as bread may have been in the diet, this was a banquet, and so we enjoyed a large number of additional dishes. On the left you can see the pork, apple sauce, carrots and parsnips. Carrots would have been purple or white in our period, but sadly such carrots are extremely difficult to get hold of.


The other photo you can see here is of the chicken and salmon patties made by Miriel de Rouen. Although to us salmon is a very expensive dish, in our period it was readily available. In contrast, chicken is comparatively expensive because chickens were more useful as egg-layers than dinner. This may be why chicken was viewed as being very good for you.  I was too busy eating to get photographs of the rest of the "mains", but they included fried beans, mushroom soup, and a cheesy turnip and leek bake. 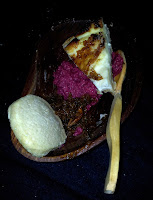 For dessert, we had short-bread type biscuits, a cheese-cake style dish, leche lumbard and raspberry bread pudding, all shown in the photograph. 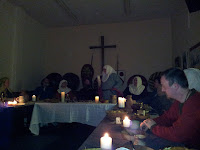 The evening concluded with some old-fashioned entertainment. Mead was consumed and toasts were made. Riddles were told, ferrets were killed,  and small people turned out to be surprisingly good at wrestling. [1]

Roll-on next year for a rematch!

[1] No ferrets were harmed in the making of this blogpost.

Posted by Caroline Williams at 8:02 PM No comments:

Unfortunately not all the group managed to get to this Regia event but I think those of us who did had a fantastic time.   This show was a little later than our core period but the group dealt with it incredibly well. The event was set in 1213, two years before the introduction of the Magna Carta.  Using the Robin Hood story as a back drop, so that the crowd could relate to the period, we tried to show how the land barons were in dispute amongst themselves about the (mis)treatment they and their surfs were experiencing.

Many of our reenactors do some later period events with other groups which probably helped considerably.  After breakfast, it was all hands to the deck to get the LHE (Living History Exhibits - or touchy feely displays) set up.  There were many arts and crafts including music, spinning, fire lighting and cooking for the public to watch and children seemed to really enjoy getting involved with the braiding displays.

The cavalry started their training early in the morning, followed by the warriors and archers.  The military displays started in earnest after a well deserved lunch break.  The mounted knights displayed their skills using traditional methods of lancing hoops and demonstrating their sword skills.  The oohs and aahs of the crowd were well deserved.  Then on came the evil Sheriff shouting about ... well, everything really ... With a splintering clash of wood and steel the knights fought amongst themselves over the right of the Sheriff to collect taxes and the taking of land.  Meanwhile a scuffle breaks out amongst the peasant men-at-arms.  Like a bunch of football hooligans they begin to brawl over which baron should be supported.  Hastily, the Sheriffs men bring some order to the events but it is too late and the peasants split and form a line.

Robin Hood is brought out and speaks for the people, demanding a charter be signed by the king to afford every man the right to justice.  As you can imagine, this does not go down well with the Sheriff, who earns his immense wealth through impoverishing others. The lines begin to move together, bristling, the sun glinting off the brandished steel.  Everyone is involved in a fight to the death now, with a thrust of a spear and a slash of a sword honour is decided.  Arms become heavy, breathing is laboured and muscles scream for rest but it cannot be given, for fear of being slain.  When at last the last of the Sheriffs men have been either been killed or have yielded, Robin forces the Sheriff to tell King John that the people demand he sign the charter ... but will the demands be met?