Last year was a quieter one for many re-enactors, due to financial constraint in the market. However despite the poor economy, 2013 looks like it will be a busy year.
Looking back, we had great fun attending events around the country. We started the year off at the Yorvic Viking festival, as usual. A chilly but large event set in York, ending with a spectacular firework display. After the spring training weekend near Ashby-de-la-Zouch we went to Greenwich to commemorate 1,000 years since the martyrdom of St Aelfage. There was a significant ecclesiastical presence for this event & we were honoured with a visit from the Archbishop of Canterbury.
Conroi de Vey joined Conquest at the Chiltern open air museum for a later period show over the May bank holiday weekend. The following weekend was a lot closer to home with the annual bring & buy sale for re-enactors at Rufford Abbey. This is quite a low key event for us, with a small LHE & some military training.
The national show at Whitby was closely followed by our local village event, held on the site where we often train.
We set up at Kelmarsh, but the rains came & the site was flooded. Some poor folk woke up to find that they'd apparently camped in a stream, with their kit floating around in the tents & across the field. Quite a disaster, with the event being cancelled & alot of unhappy people.
Our next show was a local one at Newark castle. This is a multiperiod event in a good setting in the castle grounds next to the Trent.
We joined up with Conquest again for a show at Hawkestone in Shropshire. An interesting & delightful setting, with a few competitions to spice up the August bank holiday weekend.
The end of September found us back in Sherwood forest for the Sherwood through time. It is alway a pleasure to return to the forest as a magical place for us to stay.
October saw us down on the south coast at Hastings for the battle re-enactment. Large numbers of people gather for this event from over Europe & further afield. Despite the rain & soggy field the event took place on the Saturday, but the ground was so poor that the Sunday event was called off, a real shame as this would have been the anniversary of the battle. My main consolation was that it gave me time to meet up & have a natter with Helen Hollick, a lovely lady & enthralling author. 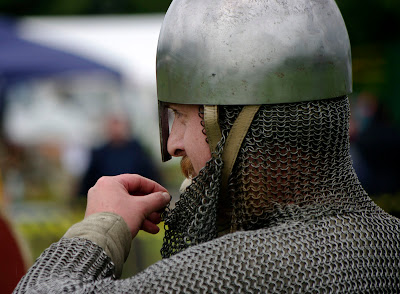 Our season ended with the Robin Hood pageant at Nottingham castle. Always damp & chilly, but great fun at a more relaxed show, with lots of other entertainment happening.
All we had to do then was dry out our kit for 2013!

Just a quick not to apologise for the lack of blogging last year. We have been battling with building work & flooding! I intend to post a brief summary of our activities last year & then make a start on this year.
I'll chat soon!
Posted by Conroi De Vey at 9:21 AM No comments: