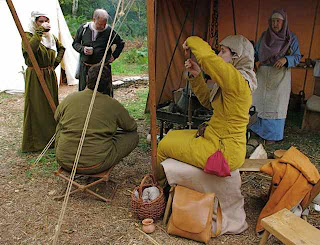 We had the most fantastic weather for our autumn weekend in Sherwood forest. The show is organised by EventPlan, who gather various groups together to provide a timeline of displays. The living history encampments were arranged so that as you walked from the visitor centre, to the Major Oak & back to the centre, you pass through time from the iron age to world war two.
Also lurking in the woods are the highwaymen, who can appear out of the trees & demand your wordly goods whilst brandishing pistols. 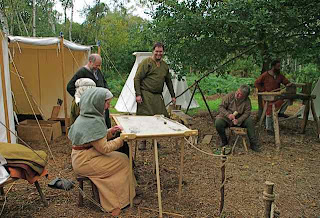 Our camp was near the beginning of the timeline, as we were working to a dateline of 1068, when the Normans started building Nottingham castle. 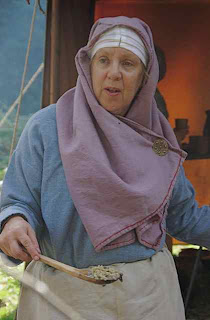 Cooking is always a regular feature of the wic, & the warmth from the fire was appreciated, especially early in the morning & later in the day! The smoke however manages to plague everybody. On the Saturday we had an onion & carrot pottage, but on the Sunday we were treated to a beef stew with a pearl barley vegetable pottage. 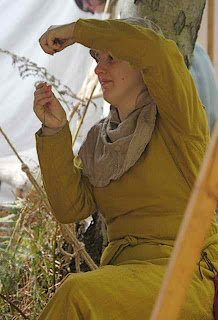 We had various crafts going on at the wic, including spinning,
wood carving, wood turning, and more work on the embroidery for the Wychurst longhall. Stephen & Trevor also started splitting the willow logs, as the first stage in the process of making a shield authentically. 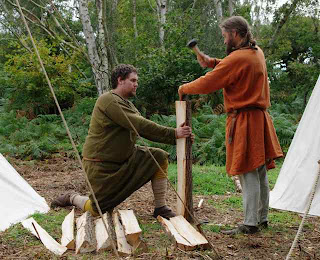 This year we were assigned the arena around the Major Oak for our displays. This entailed a walk of a few minutes through the trees. 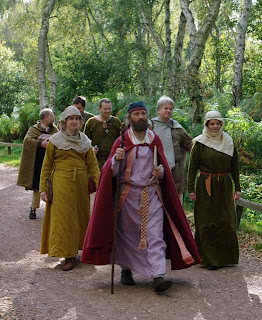 The displays included a display of weapons & their use, individual fighting, group fights &, just for a change, a wedding. 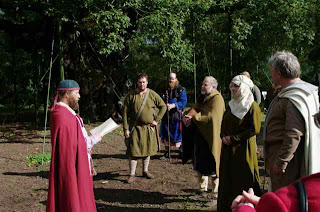 The bride & groom exchanged vows, with the agreed exchange of goods & surety being provided by the named relatives. The groom was holding on to his riches until having to hand them over to his brides relatives. 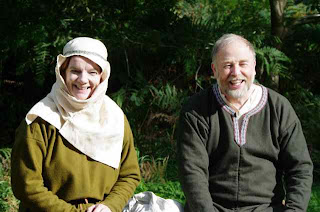 The happy couple could relax after all the legalities had been observed. 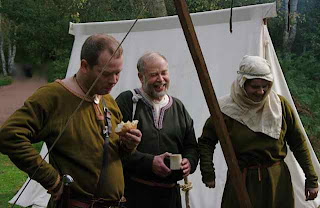 We enjoyed the usual banter back at the wic, before packing up at the end of Sunday afternoon with the autumnal sunshine slanting through the trees.