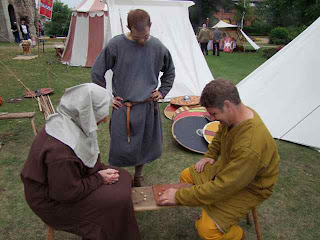 After a rather busy beginning at the start of the season, things quietened down & we didn't have another show until one at Newark castle at the end of July. Billed as 'Trent Time Travel', there were various groups there, but it was only for one day.
We had our annual barbeque at the beginning of August. The weather was very kind to us this year & we could all sit outside in the sun & enjoy the food & conversation. 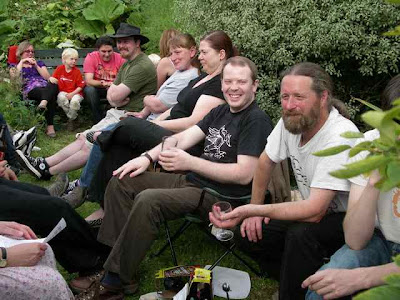 The next show was the first weekend in September in Sherwood forest.    Eventplan organise the large range of re-enactment groups, to depict ‘Sherwood through the Ages’. Visitors walk round a circular route, starting with a bronze age man, past the Romans, us, various later medieval groups, the Major’s oak, then on through the C17th English Civil war, and following centuries, right up to C20th with 2nd world war troops (who used Sherwood as an ammunitions dump). 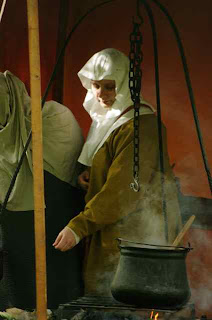 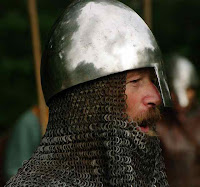 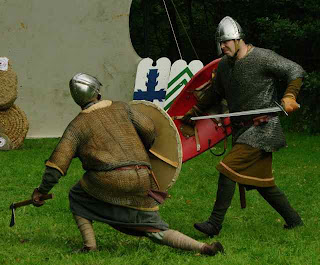 We had good weather on the Saturday, enabling us to perform our military displays underneath the Major’s oak. However, there was heavy & persistent rain overnight, which led to the ground being too soggy to be safe for fighting on the Sunday. Some groups in lower lying areas had to pack up early before they got bogged down. We were more fortunate, & could shelter in our tents until the rain eased off. We had a quiet day, with few of the public risking the poor weather, but it enabled us to sit, playing some musical instruments, & doing some craftwork. At least it wasn’t raining when it came to taking the tents down. 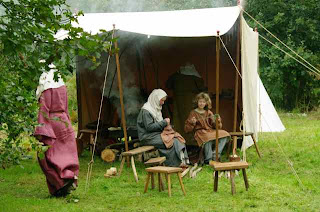 Our year finished, as usual, with the Robin Hood Pageant at Nottingham Castle.  Being at the very end of October, it is always a cold, damp show, but we still had a bit of sunshine to lift our spirits & bring the visitors in. We provided an encampment in the area that would have been the inner bailey, as well as military displays in the arena adjacent to the castle. 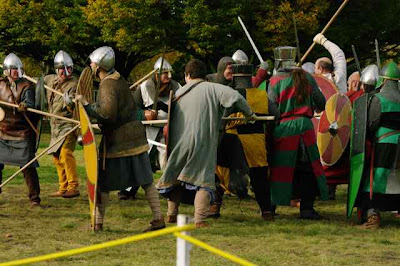 Having being joined by a number of friends from another group on the Saturday, we performed a depiction of some of the events that occurred during the siege of Nottingham in 1194. King Richard’s troops arrived to retake the castle from prince John’s garrison very shortly after Richard had returned to England after his release from imprisonment. As well as the ensuing battles as the garrison sallied forth to try to repel the besieging forces, we showed the spat between the archbishops of York and Canterbury, who argued over ecclesiastical precedence. 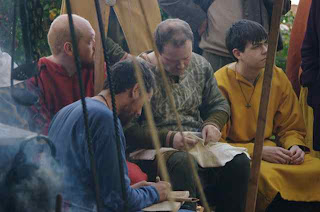 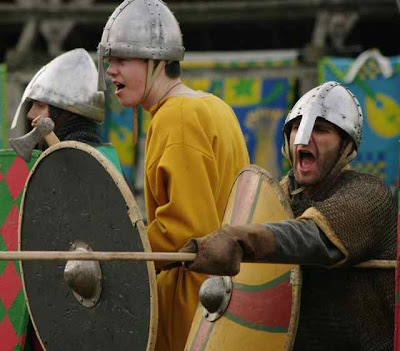 Our numbers were fewer on the Sunday, so we had a spat between the Norman tax collectors & the oppressed Saxons. It was all done in the spirit of Robin Hood, with the tax collector being thrown through a table by a disgruntled monk. It was an enjoyable show to round off the season.

We all departed, ready to settle down to our winter chores of readying kit for next year (of which, more anon!)